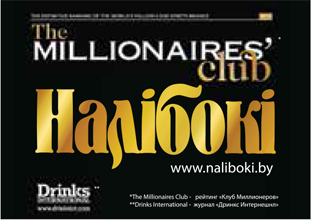 “Naliboki” brand was included in the Millionaires’ Club annual ranking compiled by the reputed British Drinks International magazine.  It was recognized as the second in the 2014 rating of the Fastest Growing Vodka brands in the world.

This ratingis one ofthe most popular and recognized among the spirits market specialists. For qualification brands must achieve global sales volumes of 1 million 9-litre cases or more, and the positionis determined based onthe annual salesof the brand. One case equals eighteen 0.5 liter bottles. It has to be noted that the Millionaires’ Club gathers leading brands from around the world.